I have been thinking a long time about forcing myself to learn Desired Stat Configuration (DSC), but I haven’t gotten around to it… Now is the time

Desired State Configuration is this super cool technology that appeared in Windows Server 2012 R2 and when Microsoft st6arted talking about it the typical example was the you hade this farm of Web Servers and you wanted to ensure that they were identically configured. The problem is that most of my customers do not have a farm of web servers… so what do I use it for. Well, Microsoft is releasing these new DSC resources on a regular basis for a lot of products which means that it is getting more and more interresting. The latest resource kit is called Wave 9 and it contains the following resources:

As you can see thare are A LOT of them… some that I think are really cool are for instance TimeZone, RemoteDesktopAdmin, BitLocker and more. Note that all DCS recources starting with an X are eXperimental. So lets get started…

DSC is built in to Windows Server 2012 R2 but it needs a patch KB2883200. If this patch is not installed you will net be able to see the modules you have installed.

There are some default resources installed by default:

If you want to install other modules (for instance Wave 9) you just download them and extract them to the folder C:\Program Files\WindowsPowerShell\Modules

To verify the install run the following command

In Windows 2012 there is a new method of activating Windows Servers/Clients and Office. The method is called Active Directory Based Activation and is an alternative to KMS and MAK activation. It works by adding a Activation Object to Active Directory which activates computers joined to the domain.

Note 3: Since the activation object is stored in AD it is replicated to all DCs which means that all DCs can act as an activation server

Today I will take a short look at enabling password reset using the rdweb component in Windows Server 2012.

This functionality is built in to Remote Desktop but it it not enabled by default. In this article we will look at enabling it and also creating a link to it on the login page

We start of by enabling the Password Reset feature. 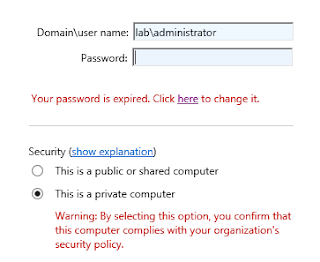 Now, to enable the link on the login page…

Today I spent the day at a customers looking at a XP computer (I know they are supposed to be extinct) having problems authenticating using ADFS. As we know XP is using IE8 and IE8 in combination with XP does not support Server Name Indication. Turns out SNI is on by default in ADFS 3.0… bummer

Fortunately it is fixable:

Start by getting information about the SST Certificate using:

The we bind the IP:port combination to the SSL cert using (in an elevated command prompt):

IMPORTANT: This works as long as the Web Application proxy is not doing anything else but working as a “ADFS Proxy”