I used LCS to make an export to LCS, performed the entire process from above and it was finally time to restore the export… did not work… The issue I was getting was an error trying to create a trigger referring to a missing column. When I looked closer at this I found that the column was missing had been removed a long time ago and (in AX/D365 removed columns gets the prefix DEL_ and this column had that). Apparently the column had been removed before the export was done and for some reason the export was not consistent.

There are a couple of different solution to this problem…

In my case I opened up the bacpac file (it is apparently a zip file). Inside is all the data and the schema for the database. I opened the model.xml file and search for the T-SQL statement that created the trigger, I changed the statement to point to the DEL_ table, saved the file and put it back into the zip and renamed it back to bacpac.

When I tried to import it I got an error that said “mismatching checksum”. In the file called origin.xml there is a line containing the checksum for model.xml:

This prevents someone tampering with the model file. To generate a ned checksum for the model file, run the following PowerShell script and point to the model.xml file. Past the HASH in origin.xml

Put both Origin.xml and model.xml in the zipfil and change the extension to bacpac. Import it again.

The final takeaway: DO NOT RELY ON BACPAC EXPORTS for backup!!! Or at least test them in some way…

A safer way to do this is probably (as long as we still have RDP access to t-2 environment):

Creating a new database as a copy of the original (since you are going to mess with it) by running this SQL query:

Since this operation runs asynchronously in the background you will have to keep an eye on it before continuing:

Tonight I helped one of my developer colleagues who had issues with one of his DEV environments. The issue was that he had renamed the VM (you cannot have multiple machines in Azure DevOps with the same name). The problem was that he had not completed all the steps that is required to rename so it was behaving a bit weird.

First of all we were not able to connect to Reporting Services Configuration Manager. The solution was unfortunately not very logical… In the onebox environment there is a couple of SQL components installed from different SQL Server Versions: 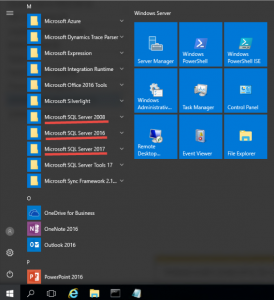 If you use the wrong SSRS Configuration Manager it is not able to connect to the SSRS Server and get the error message: No report servers were found 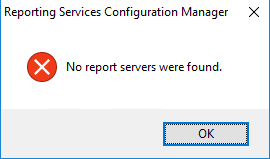 The correct version is 2016! Completely logical… NOT!

Today I urgently needed to move tempdb from one drive to another to free up space. So I googled to find a script and found this one by Brent Ozar. It has been added to StackExchange and refined a bit.

Change the newDriveAndFolder variable and run the script and it will generate the T-SQL statements you need to move them.

Today I tried to do a restore of database to an Azure DB in a Dynamics 365 for Operations environment. When I ran SQLPackage.exe I got the following error:

The solution is to upgrade Management Studio to the latest Version. Today I am setting up a proof of concept for the retail solution in AX 2012 R3. As a base I am using the Microsoft AX 2012 R3 demo VM deployed to Azure using LCS

When Trying to do a  full data sync I got the following error:
”The target principal name is incorrect. Cannot generate SSPI context”

SSPI context has to do with Service Principal Name in Active Directory. The Service Account for SQL (contoso\sqlsvc) needs to have SPN set like this:

In my case I had duplicate FQDN and no hostname. I cleaned out the duplicates and added the hostname.

This morning we had an incident with a customer who during the night had failed over their SQL cluster during the night and then failed it back again and now AX had stopped working. The error was this:

The problem is that when SQL is restarted the permission on tempdb is reset. AX solves this is a “special” way. When AX is installed the install created a stored procedure in master on the SQL server which it calls to set the permissions in case they get lost. When you install Microsoft SQL Server the install generates a configuration file. This is great if you want to create an unattended install of SQL. If you want to do a second install (or third or fourth…) just run:

and you get the same install again.

Apparently you need to start the install using this:

Today I was looking at a malfunctioning Sharepoint (for enterprise Portar) the problem was that it could not find the database for either configuration or content which meant that it was pretty much screwed. I am not the one who installed this so I did not know there to start looking. Since I am not very proficient in Sharepoint I decided to start from the beginning… Where should the database be located? I tried launching Sharepoint Central Administration… did not work. Tried launching the Sharepoint Powershell Admin console… Could not find farm… I looked in the eventlog… no mention of any SQL Server name…

So I searched around abit online and found the most basic setting… where does Sharepoint expect to find: